You are here: Home / Uncategorized / Virtual environments: Teaching us about bicycle & pedestrian safety

Over two decades ago, UI Professors Jodie Plumert and Joe Kearney collaborated to establish a virtual environments lab to study how children and adult bicyclists cross roads.  Their equipment was simpler back then —a stationary bicycle mounted in front of three large computer monitors with simulation software.

When they upgraded to three large display screens—each 10 feet wide and 8 feet high — and instrumented the bicycle to sense steering angle and rear wheel rotation, said Plumert, they could project images and render in real-time the bicycle rider’s movements through the virtual environment.

“The collaboration was born out of an interest in creating an interactive bicycling simulator to study how children’s immature perceptual-motor skills might lead to errors in crossing roads with traffic,” said Plumert.

With Kearney’s expertise in simulation software and Plumert’s in developmental psychology, The Hank Virtual Environments Lab has been helping us understand what puts pedestrians and bicyclists at risk when crossing busy roads.  Researchers have looked at factors related to age, social interactions, and Attention Deficit Hyperactivity Disorder (ADHD).

The UI IPRC funded the lab’s first pilot project using the second generation bicycling simulator, which looked at how 10- and 12-year-olds and adults cross roads with continuous cross traffic.

“This work showed that children and adults chose the same size gaps, but adults had much more time to spare when they cleared the path of the traffic. When we looked back at what the children were doing, we saw that they delayed their initiation of movement into the gap. This resulted in less time to spare when they exited the gap,” Plumert said. “This then led to a long line of research on the development of children’s road-crossing skills.”

Their research found that child pedestrians do not compensate for these immature movement timing skills by choosing larger gaps until age 12.

“Not until children are 14 years of age do they exhibit pedestrian road-crossing skills that are indistinguishable from those of adults when faced with the problem of crossing a busy road with continuous traffic,” Plumert said.

Elizabeth O’Neal, who recently completed her PhD at the UI, used Hank Lab for her dissertation on parent-child interactions related to pedestrian safety among children with and without ADHD. O’Neal previously worked with the UI IPRC during her graduate studies on two school bus crash projects and attends the UI IPRC’s interdisciplinary Transportation Safety Expert Research Team’s informal networking meetings. 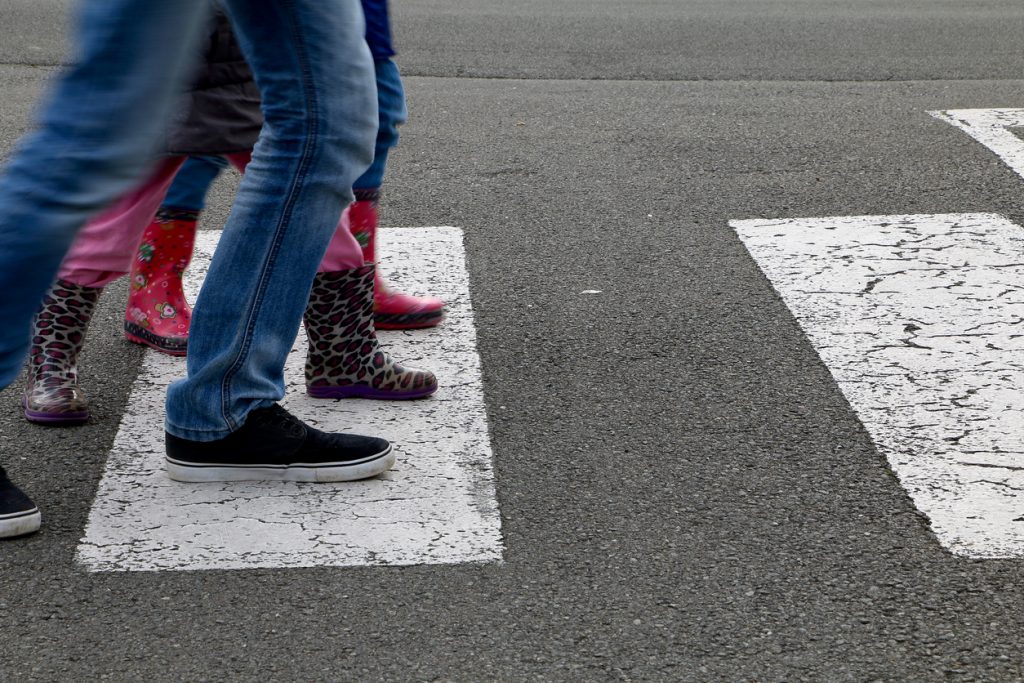 “I chose to study parents’ role in unintentional childhood injury prevention because parents are well positioned to teach their kids about safety. However, beyond supervision, relatively little is known about how parents teach their children to navigate risky situations on their own,” O’Neal said.

O’Neal found that increased oppositional behavior, common in children with ADHD, may make it more difficult for parents to teach children about how to cross roads safety, like giving their child advanced warning of which gap they chose for crossing or evaluating the crossing outcome with their child.

Using the simulators to study these interactions is particularly innovative, O’Neal said, as capturing interactions when parents and children are engaged in potentially risky activities like crossing busy intersections is extremely difficult.

Bicycle and pedestrian fatalities and injuries in the last 10 years have steadily increased. Male cyclists are much more likely to be injured or killed than females, and children between the ages of 10 and 14 have the highest percentage of pedestrian traffic fatalities.

Plumert said, “These statistics indicate that we need to develop strategies for improving traffic safety for bicyclists and pedestrians, particularly as bicycling and walking become more popular.”

Because of research on how younger children cross streets with continuous traffic, O’Neal said, training them to choose larger gaps may be a viable intervention that the simulator could test for effectiveness.

A study currently underway at Hank Lab is how children’s gap decisions and movement timing while crossing roads is different on foot versus on a bicycle.  Plumert said this could suggest some re-learning of road crossing skills occurs when adopting a new mode of locomotion, such as bicycling or driving.

Researchers at Hank Lab also found that road-crossing safety is improved with auditory alerts sent to adult pedestrians’ cell phones about when it is safe and unsafe to cross.

Also underway is research on road-crossing behaviors of pairs of people in the same simulator versus in separate but connected simulators in the same virtual world.

“Our next step is to connect our bicycling and pedestrian simulators with the driving simulators at the National Advanced Driving Simulator,” Plumert said.

Read about other innovative technologies used to study injuries at the UI, including the world-renowned National Advanced Driving Simulator (NADS).