You are here: Home / Uncategorized / Linking school children with trauma to care

Many children who have experienced trauma show up in the school nurse’s office with headaches, stomach aches, loss of appetite or overeating, and unexplained irritability. These nonspecific symptoms mimic depression but stem from trauma from extreme experiences, such as homelessness, or from events considered part of ordinary life—divorce, death, or family illness.

This is one reason why Dr. Marizen Ramirez, Associate Professor at the University of Minnesota, and her team focused on school staff including school nurses when they developed Link for Schools. This intervention program trains them to listen and respond to students with trauma and is being implemented in elementary and middle schools in Cedar Rapids, Iowa.

“Children who experience trauma have trouble expressing their feelings, and instead show up with confusing behaviors or vague symptoms that are hard for school nurses to diagnose,” Ramirez said.

Link for Schools uses psychological first aid to reduce distress, encourages coping skills, and builds resiliency through the support of trusted adults at school. School staff develop a better understanding of how trauma affects students at home and at school and use an evidence-based, open-ended communication style (called motivational interviewing) with students using empathy and reflection.

Ramirez began working with Iowa schools when she was faculty with the Injury Prevention Research Center (IPRC) at the University of Iowa College of Public Health.

She said, “Because nurses can be important gatekeepers to various health supports, we chose to train nurses in our early programs of Link. Schools are an ideal place for screening and intervention.  Children spend a substantive amount of their waking hours at school.” 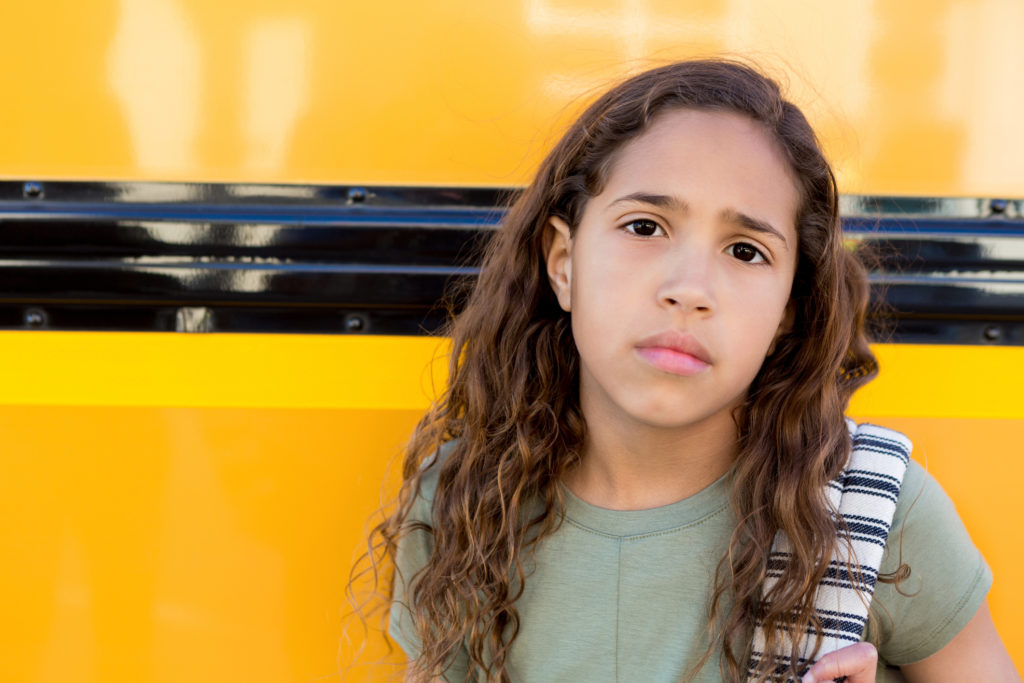 Schools are also a place where trauma can occur, such as bullying, and school staff are motivated to support children with trauma, Ramirez said.

“The best part of this research has been working with school staff, meeting parents and children, and seeing some of the impacts. We began in Cedar Rapids, and now are reaching schools across Minnesota,” she said.

Schools across the country are providing trauma-informed trainings, Ramirez said, but they primarily focus on increasing awareness about trauma and its negative impact on child development.

“Many trainings still leave schools asking, ‘now what?’” she said. “Our trauma-informed Link program goes beyond awareness and builds skills in communication, screening and referral.”

The Link for School training begins with an instructional video and discussions about trauma among all school staff participants. This is followed by more intense motivational interviewing and psychological first aid training for selected staff involved in one-on-one supports to students with traumatic experiences.  Selected staff have included counselors, school nurses, teachers, administrators or support staff such as a para or food service worker. The Link team works with schools for at least two years to build their capacity to deliver the program.

Sally Immerfall is a former school nurse who has conducted interviews and focus groups with school nurses and school representatives in Iowa to adapt and translate the Link in Schools training to school nurses given their vital role in schools. Link supports the specific needs of school nurses as they interact with students dealing with trauma.

Immerfall said traumatic events and toxic stress can cause behaviors in school children that vary greatly, ranging from outbursts to shutting down and refusing or being unable to communicate.

“How can you focus on math or spelling or a foreign language when your mind is on what you witnessed or experienced last night or last year?” It is difficult to learn if you don’t have your basic needs met at home, don’t feel safe, or have been exposed to traumatic events,” she said.

Before reaching adulthood, more than half of all children will have experienced trauma, and children of color are at higher risk. Having multiple adverse childhood experiences (ACEs) is more common among American Indian (40%), Hispanic (31%) and black (33%) children compared with white children (21%).

Ramirez’s work in trauma-informed care began when she received a pilot grant from the UI IPRC to address childhood trauma in Cedar Rapids after the 2008 flood affected thousands of families, homes and businesses. She said Dr. Marleen Wong, a world renown expert in childhood trauma from the University of Southern California, came to Iowa to train school nurses to deliver psychological first aid to middle and high school children impacted by the flood.

“The study continued for another two years post flood, and the skills were applied to any child who was traumatized by the flood as well as other events such as bullying, witnessing violence in the community, suicidal ideation, or illness or death of a parent or other family member,” Ramirez said.

Students who received the psychological first aid had reduced symptoms of depression and posttraumatic stress disorder. Supports included referrals to a mental health professional, connections back to school through activities, and techniques in conflict resolution.

Ramirez and her team also looked beyond the classroom. They developed Link for Injured Kids, a program to educate parents in a hospital setting on how they can support their children after a severe traumatic injury. The program was implemented at the University of Iowa Stead Family Children’s Hospital, Children’s Mercy Kansas City (MO), Children’s Minnesota Hospital, and Blank Children’s Hospital (IA).

“Unintentional injuries can cause pain and suffering, and thus impact a child’s quality of life,” Ramirez said. “Hospitalization can also lead to social isolation, as can a challenging road to physical recovery.  Even weeks to months to years after healing from a physical injury, psychological scars remain.”

Building connectedness and social supports are key for children who suffer any trauma, including an injury, Ramirez said.

“In our work, we focused on building the efficacy of parents in motivational interviewing skills in order to fully support their children’s emotional recovery,” she said. 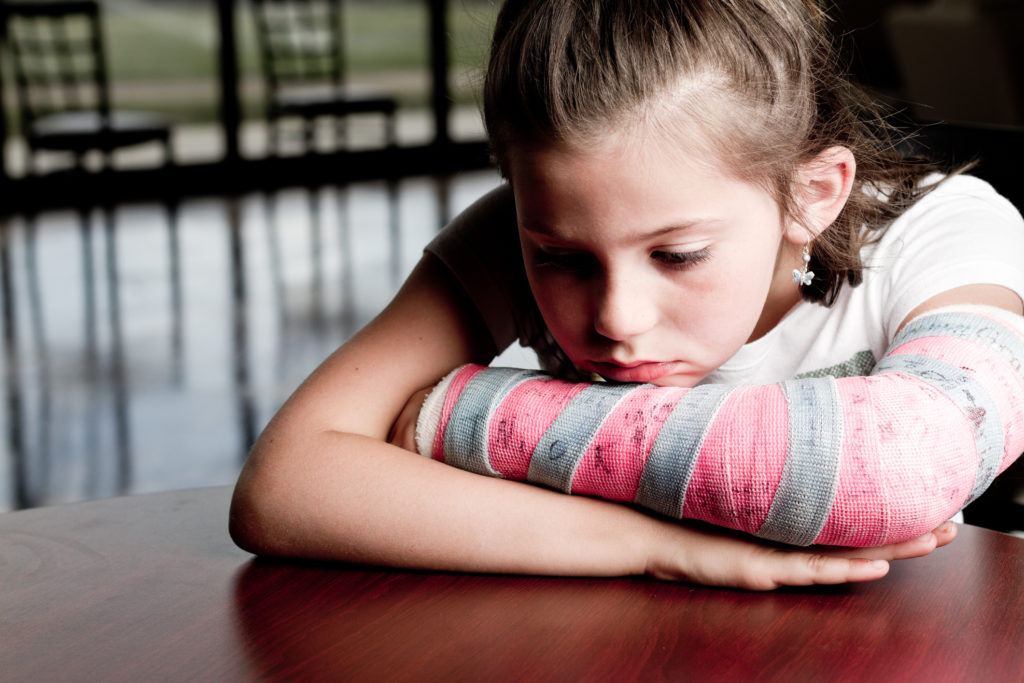 What’s next for Link?

Currently Ramirez’s team is conducting a large trial in the Cedar Rapids Community School District to assess if Link for Schools can reduce violent behaviors at schools.  Over 20 staff have been trained and over 500 students have been supported through one-on-one Link supports.  The study, that began with seed money from the UI IPRC and then led to a grant from the National Institute of Justice (led by Dr. Karen Heimer), will be completed by the end of 2020.

“Our early analysis shows that Link is associated with reduced levels of stress,” Ramirez said.

Another Link program, Link for Equity, combines the original Link intervention with cultural humility training to address traumas such as racism and discrimination, which impact children of color.  This program is being piloted in six school districts across Minnesota. So far 300 staff have been trained and 200 students of color (Native American, black and Latinx) have been reached.

Ramirez and her team hope to adapt the Link intervention for new populations or in new community settings, such as juvenile corrections, before/after school programs, and alternative schools.

She said children and families from all walks of life are participating in a Link study, for example, from urban children in the metropolitan Twin Cities to rural ones from tribes of Greater Minnesota.

“This makes the work we do very grassroots, and each day, we learn more about the communities we service,” she said. “We are excited about Link’s potential, and will learn, with a rigorous research design, if it can make an impact.”