In farming states, urban sprawl around traditionally rural areas is just one of the reasons crashes between farm vehicles and passenger vehicles are likely to increase. With drivers unfamiliar with farm equipment, they may not know how to interact with these very large and slow-moving vehicles on public highways.

However, alerting drivers with lights and markings on farm vehicles – such as the taillights and slow moving vehicle emblems – is one strategy that UI researchers found is helping.

A new study shows that stronger state policies on the lighting and marking of farm equipment is associated with reduced crash rates involving farm vehicles, and could decrease such crashes by over 50%.  The study, funded by the Great Plains Center for Agricultural Health, is the first such study to show this evidence.

Researchers compared nine states’ policies on lighting and marking with the standards offered by the American Society for Agricultural and Biological Engineers (ASABE), generating a compliance score for each state.  Illinois had lighting and marking policies most consistent with ASABE, while Missouri had the least.  Iowa was less consistent with these standards, ranking 7th out of nine states.

Researchers then calculated the expected decrease in farm crashes if each state improved its combined lighting and marking compliance by 25%. With this calculation, Iowa would expect an annual average decrease of 164 to 65 crashes.

Some good news: State policies have varied considerably, but a new federal regulation in June 2016 sets forth requirements for lighting and marking of agricultural equipment based on ASABE standards.  Manufacturers have one year from the effective date to comply with the new rule.

Researchers found that during a 5-year period (2005 – 2010), there were over 7,000 crashes involving farm equipment (average over 1,000/year) in the nine states (IL, IA, KS, MN, MO, NE, ND, SD and WI).  They also found such crashes were more likely to occur on high speed roads, roads with more traffic, farm to market routes and roads with small lanes and widths.  As many as 30% of the farm crashes occurred in urban zip codes.

Read more about the farm equipment crash study from the Great Plains Center for Agricultural Health.

See the safety handout: “When Driving Farm Equipment on Roadways.” 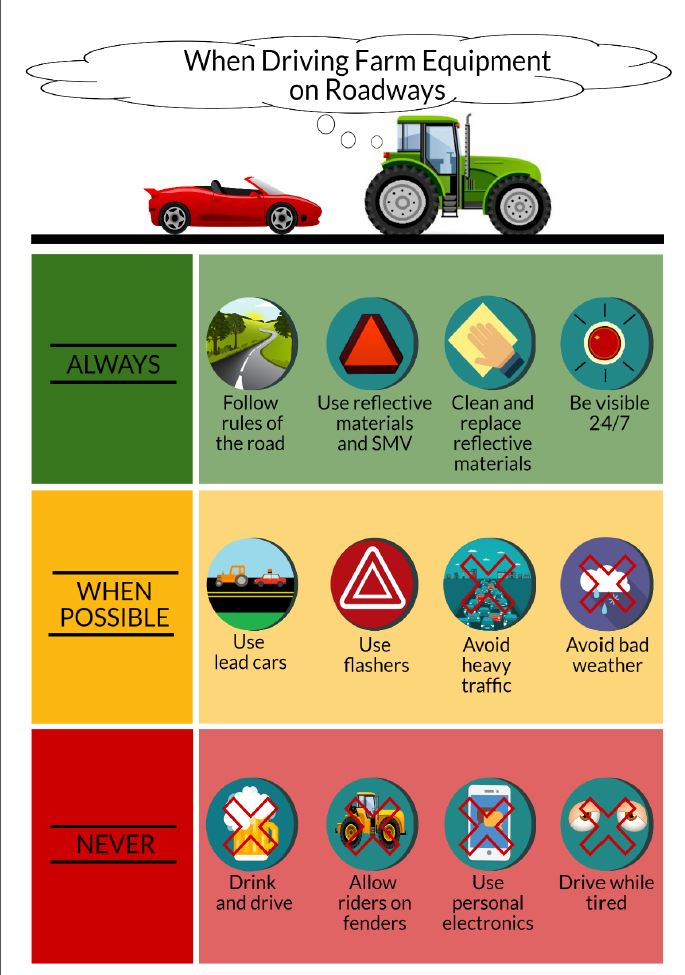 See media coverage of this research on KCRG news and Iowa now.