October 2—Deaths from prescription opioids have quadrupled in the past 20 years in Iowa.  Such death rates are lower compared to other states; however, Iowa is one of four states with such a dramatic increase.  From 2002 to 2014, as many as 1,239 people died from a prescription opioid overdose in Iowa. 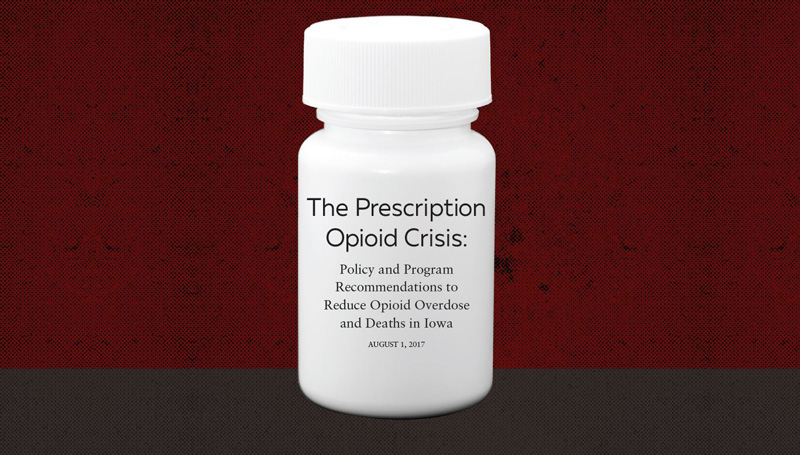 Lead author and Associate Director of the UI IPRC Dr. Carri Casteel said organizations and agencies can use this report as a tool to educate themselves on where Iowa stands in the opioid epidemic with respect to current policies and programs. The report also identifies priority policies and programs that Iowa legislators and other stakeholders can consider as the state moves forward with addressing the opioid problem.

“We looked at evidenced-based strategies for reducing the opioid epidemic and compared them to policy and programs happening in Iowa,” she said.  “It was a way for us to take inventory of our successes and identify gaps specific to Iowa.”

In April, 38 stakeholders gathered in Des Moines to discuss the evidenced-based strategies and then identified priorities for moving forward. At the stakeholder meeting were representatives from law enforcement, public health, poison control, nursing, pharmacy, insurance and more.

“The opioid epidemic is a multi-faceted problem that can’t be solved by individuals working in their own silos or field of expertise,” Casteel said.

On October 16, the UI IPRC will present the report to a legislative committee tasked to evaluate the opioid epidemic in the state.  The UI IPRC received a grant from the Centers for Disease Control and Prevention (CDC) to conduct this work, which also involves Injury Prevention Research Centers at Johns Hopkins, University of Michigan and West Virginia University.

Read more about the report in Iowa Now.

Read the op-ed in the Des Moines Register by Casteel and Kevin Techau (formerly of the Office of the U.S. District Attorney of Northern Iowa).