Click below to learn more about some of our bicycle/pedestrian safety projects.

In 2012 alone, more than 8,800 children 14 and younger were injured in traffic collisions in the U.S. and 58 were killed. In addition, little is known about the risk exposure and actual cycling behavior of children on their trips to school, including how this varies between urban, suburban, and rural locations. This research builds on our previous naturalistic cycling behavior work by using GPS-enabled bike-mounted cameras in conjunction with detailed audits of the built environment along routes to school. We will examine shortest routes and those actually chosen by children to determine differences in characteristics, safety, and riding behavior between urban and suburban school sites.

Download the infographic: What should we teach children about bicycle safety? 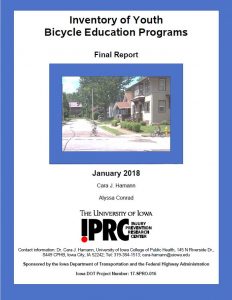